I is for Ibex 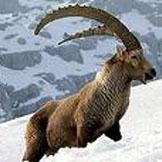 IBEX energy is a support when you need to feel secure and balanced.

Ibex as a power animal would be very helpful if your life mission is to eg climb Mt Everest, literally or metaphorically.

It is helpful when dealing with teens..nudging them in a helpful direction rather than locking horns with them

Ibex is a kind of goat,  sometimes called the Rock Goat, or Wild Goat. It resembles the common goat, but is larger and its horns are much longer; they are sometimes more than a yard in length, beautifully curved, and surrounded by many curious rings or ridges.


It lives in places where you would think no animal could get without falling and breaking its neck; you would be frightened to see it sometimes, when it climbs up rough and narrow places, or jumps from one great rock to another. But nature has given it just such a kind of foot as it needs; it has a small hoof, something like those of a sheep, excepting that it is hollow underneath, and has a sort of ridge around it by which the animal can cling to the rock, and so keep from slipping. I never heard of such a thing as one of them sliding off the rocks, unless it was pursued by the hunters.

Two goats once met on a high narrow path, where there was just room for one to walk. There was a high rock rising close to their shoulders on one side, and on the other was a place so steep that it would have made you dizzy to look down. They could not go back without danger of falling, and they could not pass each other; what do you think they could do, but stay there and starve? It seemed for a little while as if they were considering about it; at last one bent his knees and laid down, and the other walked safely over his back.


The ibex feeds during the night in the highest woods that grow on the mountains; but as soon as the sun rises it begins to climb, eating the grass or whatever it finds, till it has got up where it is too high for trees to grow. They go in small companies of eight or ten, and lie down in sunny places among the rocks while the sun is hot; but about three or four o'clock in the afternoon they begin to go down again towards the woods. They can climb up rather more easily than they can get down, because their fore legs are shorter than the others. What animal do you have an affinity with?